I have been hooked on sailing for around six years – any kind of sailing on any size of boat and with anyone who was willing and brave enough to cope with me! Living and working in London, the options for sailing in open water are fairly limited. So after learning at a local sailability club on the docks in south-east London, I started to train with a group for VI sailors, mainly in Cowes on the Isle of Wight and on Lake Windermere. Through that, I was selected as part of the GB blind sailing team for a recent World Championship event in Chicago, United States, (otherwise known as the windy city). And here is a short note about the regatta.

Fleet racing regattas for blind sailors are a team event involving both VI and sighted crew members. Typically the format is a crew of four with the two VI crew members responsible for steering the boat and controlling the main sail whilst the two sighted crew members control the smaller foresail and act as tactician (who is not allowed to touch any controls). The regattas are usually sailed in three sight categories (B1, B2 and B3) as with some other sporting events. I was selected to helm/steer the B1 boat for the GB team. The boats used are usually keelboats and, in the regatta in Chicago we sailed in Sonars (which are a current paralympic class boat).

We were all kept very busy in the lead up to the event. We were lucky enough to have some excellent coaching in advance, including a couple of weekends with a paralympic sailor coaching us. Between sailing weekends, I was trying to improve my fitness and stamina levels with three or four gym sessions and other fitness training and revising my knowledge of race rules etc. As well as the obvious training , we had a lot of venue research and logistical arrangements and, of course, some fundraising towards the expense of sending a team to the US. All in all, it was quite an intense build up to the event.

The world fleet racing championship took place from 10-13 September on Lake Michigan from Chicago Yacht Club. We arrived on the Sunday before to give ourselves a couple of days to adjust to the time zone and sort out registration, eyesight tests and participate in practice sessions.

Four days of racing were planned but true to its reputation we had some fairly extreme variations in weather conditions which meant that we went out sailing on five days (including practice sessions) but only raced on two days. We went out to practice in torrential rain whilst other teams watched from the comfort of the yacht club bar. The first race day we were forced back into harbour by fairly spectacular thunder and lightning. On the second day racing went ahead in strong wind and exciting waves (but without the risk of electrocution) but racing was again called off the following day in wind speeds between 30 and 40 knots and waves over 10 foot high. The team managed the conditions on the second day (probably because they are similar to those we are used to training in back in the UK) and suggested that we were happy to race the following day. The race committee weren’t convinced. By the final day the weather had changed again to blazing sunshine, temperatures over 30 degrees, flat water and lighter wind. Despite the interesting weather variations, the race committee managed to Pac in 8 races for each fleet plus some aborted races. The racing was very close and the positions of boats in each fleet and the overall country winner weren’t clear until the last race. It was exciting and a fight right up to the last race.

There were 3 fleets and the GB team had an entry in each fleet. We came back with bronze medals in the B1 fleet (me, Vicki Sheen, Ian Shirra and Martin Moody), silver medals in the B2 fleet (Lucy Hodges, Martin Philips, Gary Butler and Dave Ross) and B3 fleet (Laura Cammage, Chris, Jonny Stevens and Jonny Cormac). Different teams came first in each fleet and so we managed to beat our main competitors, New Zealand and the United States, and retained the Squadron Cup for the top-placed country overall. Great results but an enthusiasm to train hard and develop the training squad to work towards even better results at the next fleet racing event in two years’ time.

Team members now have a few weeks to recover before the nationals to be held in Cowes the first weekend in October, which is generally a less formal competition and an opportunity to get more VI sailors involved in racing. 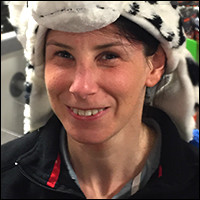