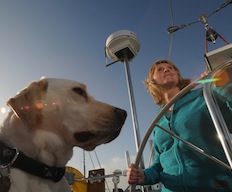 “When people want to wind me up they say I’ve got extra-sensitive hearing!”

Vicki Sheen laughs as she reflects on another golden year for Britain’s blind sailing team.

Vicki and her 11 GB teammates returned triumphant from the IFDS Blind Sailing World and International Championships 2013 in Japan in June.

They claimed victory in the B1 and B2 classes, plus silver in the B3 class, to take the overall Squadron Cup for the top nation, while Vicki and her B1 crewmates were awarded The Colin Spanhake Trophy for their win.

But the sailors have already turned their attention to making it back-to-back World crowns, and replicating the success they had in Perth, Australia in 2011, at the IFDS World Match Racing Championship in Boston, USA in 2014.

Born with 10 per cent vision, which she gradually lost by her late twenties, Vicki discovered sailing on a standard RYA learn to sail course in Salcombe, Devon in 1996. Within three years she had joined a committed group of visually impaired and sighted sailors to set up the British Blind Sailing Racing Association, which became Blind Sailing UK, of which Vicki was the Commodore for six years.

So why have the Brits been so successful in both fleet and match racing in recent years.

“For example in the BI class in fleet racing the mainsheet hand must be a VI, with a sighted tactician who can’t handle any controls at any time while racing and a sighted crew who can handle all controls with the exception of the helm, mainsheet, and the mainsheet traveller. There can be seven or more boats on the racecourse so start lines and mark roundings would be chaos without a sighted element aboard.

“The teamwork and communication required to make this work as effectively as possible doesn’t happen by accident. For the Japan Worlds we had a really intense training period through the whole winter mainly out of UKSA on the Isle of Wight and Castle Coombe SC in Weymouth. We competed in the RYA Spring Series events and trained with some of the British Paralympic Sonar team, so it was very professional.

“We had a bigger squad, which was well-trained and experienced in terms of both the VI and sighted sailors. This meant it was actually a tough selection, only the best sailors and strongest teams went. All that work definitely paid off.” 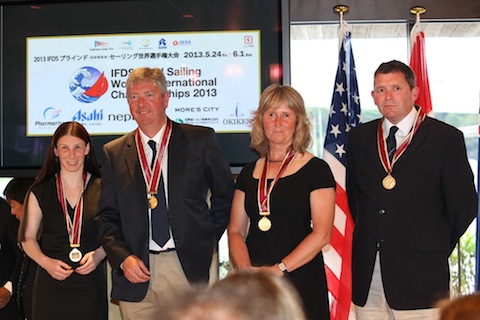 The match racing the Brits will experience in Boston next year, however, will be quite different again.

With three VI sailors in one boat, but only two boats going head-to-head at any one time the sailors rely on audio buoys, radio countdowns and on boat audio-tone to let them know where the other boat is, how close it is and whether the other boat is on port or starboard. Vicki admits especially the pre-starts are very, very intense, but it is an amazing adrenaline buzz.

“For me as a blind sailor, how I log sensory information is critical,” she added. “Sight takes over as the dominant sense for most people but VI people have to take their cues from other sources and make sense of that information in order to paint a picture in our minds.

“We don’t have extra-sensitive hearing! We are just able to focus on the information we are receiving and log and register that to make well-rounded decisions. The more you can train that on the water the better a sailor you will be regardless of sight.”