“That feeling … on the edge of the plane, when are we going to go? … and suddenly VOOM you’re gone … the Noise… Absolutely Sensational!”  Chris Lewis

I blame it on having an action man as a kid and the abundance of war-related stories on television and at the cinema in the 60s and 70s. 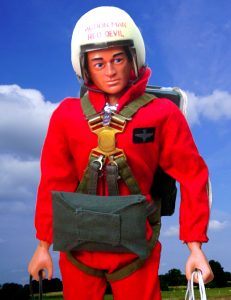 But, when offered a choice between a posh lunch out, a new fire pit or a parachute jump for my 60th birthday, I jumped at the parachute option.

The organiser hadn’t sent much information other than that I was doing a tandem jump, to bring a face mask and a pen as well as to wear trainers. Obviously, I had thought of what it might feel like but I headed off to Headcorn Aerodrome in Kent a couple of weeks ago feeling like it was a bit of an adventure.

The training was very clear about what to do: listen to your instructor, keep your head up when you jump out of the plane and lift your legs when told to do so approaching the landing. Simple! Fitted out in an overall, sporting a very tight plastic face mask and tied tightly into a harness we boarded the small Cessna Caravan plane. 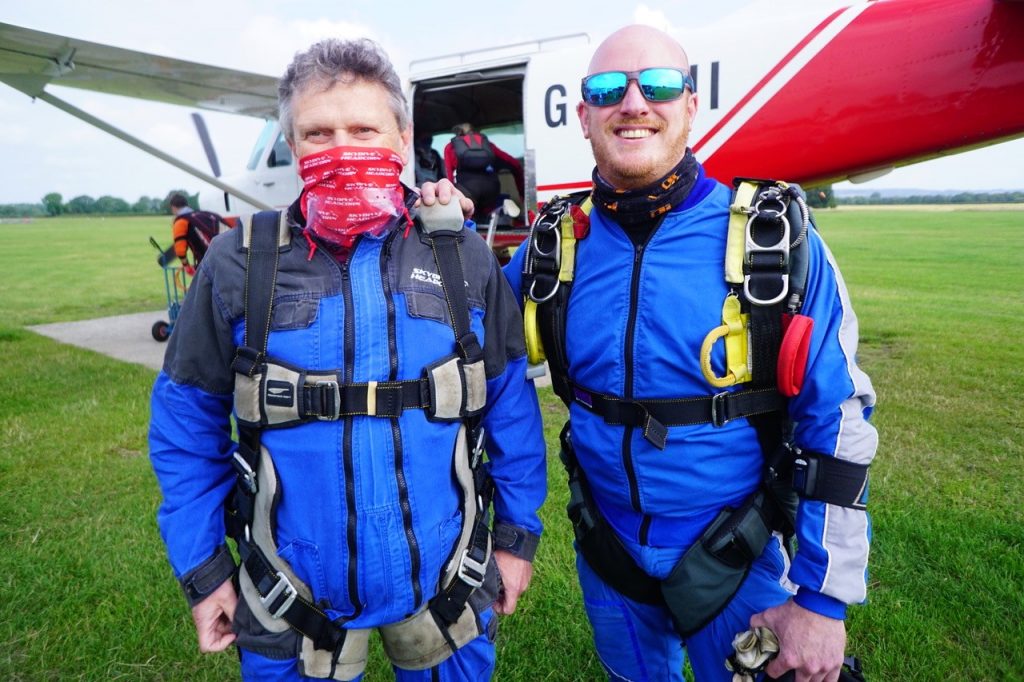 Once aboard the instructor secured his harness onto mine and tightened it up. We were pretty close.

I asked Steve (the instructor) a lot of questions about what it would be like, how long each part would last and how many times he had jumped. He said we would not be able to communicate during the free fall but would be able to do so once the parachute kicked in. Luckily he was very experienced!

When the light came on after 15 minutes of circling and climbing above the airfield to 12,000 feet we bum-shuffled to the up and over door. I had been told to hook my feet under the plane and then we would rock backwards and forwards a couple of times before Steve would initiate the jump. Well, honestly, when I got near the open door all I could hear was rushing air passing the plane.

I fell, didn’t jump and the noise was incredible. It was, I should be honest, very disorientating. Apparently, we free-fell for 45 seconds.

During this time I gradually got my orientation back and Steve got us in the classic skydive position with arms out to the side and pointing forward and legs curled up behind.   Once settled, he spun us around to face the cameraman (who had jumped from the plane just after us) and made me wave at the camera. Bizarrely, it didn’t feel like we were falling at over a hundred miles an hour, but we were. It wasn’t cold and I didn’t have any other sensation other than the noise in my ears. It was actually very comfortable.

45 seconds in and 6,000 feet later, the parachute kicked in. Amazing, from that rush of noise to absolute silence. Steve asked me if I was OK. Honestly, I was feeling a bit nauseous but declined the offer of a sick bag! In fact, Steve then asked me if I wanted to  ‘pull some moves’.

This involved various degrees of turns with him controlling the parachute from a couple of guide rods. After an initially gentle one he asked if I wanted to go for it. Never being one to decline a new experience, I said yes. He then proceeded to take us through a figure of eight, pulling several Gs of pressure on our bodies. At one point we were, apparently, facing directly down to the ground, with the parachute out to our side. It was absolutely exhilarating.

After the initial 45 seconds of free fall the parachute part  lasted around 6 minutes. Before I knew it Steve said, ‘750 feet, get ready to lift your legs when I tell you’. He told me.

I lifted my legs up in front of me and we landed with him sliding in behind me. It was as gentle as sitting on a sofa. The only problem on landing was me getting tangled up in the lines from the parachute!

So, back on terra firma, the adrenaline really kicked in. If you get a chance to watch/listen to the video you will hear my bad language.

Blind Man and a Parachute Video below

It’s fair to say that I was buzzing for days afterwards. The thought of that final second in the plane and the first second falling out were amazing. And, yes, I would do it again, if only to focus on that initial experience of free-falling.

It’s not for everyone. Indeed I reckon 80% of people I have talked to said they would never go near it. For the other 20%, I really recommend it as one of those experiences in life you really should embrace.

And, as a blind person, those sensations of falling, flying, experiencing G-force all compensate for not being able to enjoy the view – of the Thames estuary apparently.

Mind you, not being able to see out of the plane in the first place also probably helps.

Get all the latest blind & partially sighted event information & news as soon as we do!Metro Blind Sport:  Facebook