Four years ago Matt Lancett suffered a stroke which resulted in him having a visual impairment.  It was a blow to his independence and confidence and, as a keen sportsman, he felt his life had no future.  All this changed when he discovered and started taking part, in VI sport.

We caught up with Matt to find out about his story and how sport has changed his life.

Matt Lancett is a happily married 45-year-old man with two children.  It was on his wedding anniversary that the stroke caused the loss of his left field of vision in both eyes (a condition called left homonymous hemianopia) and his life was changed forever.

Prior to his stroke Matt was a qualified butcher, played football regularly and was a keen runner, which included him completing the London Marathon.

After coming out of hospital he suffered with balance issues, severe loss of confidence and anxiety for the next 12 months.

But his fortunes changed when his brother told him about a woman with a visual impairment, who was playing rugby at Warriors Community Foundation in nearby Worcester.

“I’d started to think about playing football again, but it was too far to travel and I didn’t have the confidence. As rugby was on my doorstep, the anxiety of travel was removed so I decided to get on the train for the short journey and give it a try. 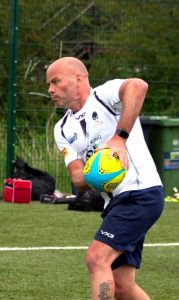 “Having a ball back in my hand was incredible. It was instantly a huge lift to be playing some type of sport again.”

In a short period of time, Matt found himself taking part in more sports and he joined the local VI cricket team. He also now takes part in running again with a guide and plays football. 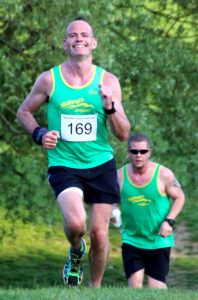 He found through running, football, cricket, and in particular rugby, a new sense of freedom.

His confidence steadily grew. There were no longer constant worries about bumping into things. No worries about cars or other people around as he knew he safely on a sports pitch.

As well as playing locally in Worcester, he is part of the Change Foundation team in London. To take part in this he travels independently each month, even though this is challenging.

But the rewards have been life-changing! Matt was lucky enough to join the UK team in Japan to play VI rugby as part of the rugby World Cup arrangements in 2019. He travelled to Tokyo to compete in a three-test series against rivals from Japan and New Zealand. For Matt, it was an experience of a lifetime.

He looks back to how it all started:

“If it wasn’t for my brother telling me about VI rugby things could have been very different. I had to have some drive to get up and try things out and I would encourage everyone to try something new – you might just reap the same benefits I have.”

Prior to getting active again, Matt thought he was a 40-year-old man with no future. He now knows this is not the case, but he needed the support of family and his friends to realise what could still be achieved.

He is now working with Warriors Community Foundation to promote visually impaired rugby to people in the Worcester area and beyond. He said: “The aim is to roll out the game to all parts of the UK, to remove travel and cost barriers that exist and provide opportunities at a local level.

“I back working and my family more broadly has benefited. My wife has got some of her freedom back to do things just for herself. She has the confidence that I am taking part in activities safely and working alongside people who understand what support is needed.’

Sport and physical activity was the springboard that Matt needed to get some part of his old life back. He added:

“I encourage all visually impaired people to try something new as I know the impact it can have. It has transformed my life and given me back the confidence to live life to the fullest.”

If you would like to try a  blind or partially sighted sport, please contact our Sport Development Officer: charlie.raven@metroblindsport.org or call 07956 292046

This managing sight loss session with London Vision will explore sport, leisure and hobbies, and will point you to a number of groups and activities to take part in. Metro Blind Sport and Vocaleyes will also join the session to talk about sport and leisure in London.

Where:  Online – via Zoom and telephone

London Vision welcome, friends and family and if you’ve never used Zoom we will do our very best to explain how it all works.

Managing Sight Loss sessions are friendly and relaxed, and we ensure that everyone has time to talk. Each session is themed, and we cover a variety of topics from registration, rights and benefits, to technology, sport and leisure.

We look forward to you joining the sessions.

For advice on using the Zoom video conferencing platform, please check out this article.

House of Lords National Plan for Sport and Recreation Committee

Last week Martin Symcox, Metro Blind Sport CEO, was invited to give evidence at the House of Lords National Sport and Recreation Committee. Martin was in a breakout room with Lord Addington, Baroness Morris and Baroness Brady.

Before the Meeting, Martin contacted a few of our members to get their views. A huge thank you to all who provided their feedback.

Armed with the positive evidence on what sport can help achieve. Martin highlighted the key issues facing young, visually impaired people regarding sport and physical activity directly to the house of Lords.

Rainbow Mbuangi, a young man from St. Vincent’s school, joined Martin and shared how his confidence grew considerably since fully partaking in a range of sports he couldn’t previously!  Now Rainbow is a Merseyside Blind and Visually Impaired Football Club player and part of the England Blind Football squad.

It was a rewarding experience for both Martin and Rainbow as they engaged the Lord’s Committee in the issues faced, and it is pleasing to know that they are keen to find solutions.

The committee has been receiving written and oral evidence since December and continue to do so. Historically, evidence committee’s produce a report for the Government based on their findings.  We will update you when we know more.

British Blind Sport have announced a new Youth Advisory Panel for young people with a  VI, involved in sport and physical activity

So get your thinking caps on!

British Blind Sport is excited to announce that we will be selecting up to 12 young people with visual impairments and aged 16-25, to become part of a new Youth Advisory Panel.

The Panel, or ‘YAP’, will act as a voice for young visually impaired (VI) people involved in sport in the UK, support BBS with policy and project development and advise on issues relating to young VI people in sport and physical activity.  As this project develops we are hoping that the Panel will also be able to advise and influence a range of sports organisations on how they can best support VI volunteers and participants.

This is a fantastic opportunity to for young VI people to truly be heard and have a positive and long lasting impact on the wider sporting community.

Applications will open from Friday 25th September when a full information pack will be released alongside the application form. For more info, head over to

Applications can be fun and innovative to provide you with the opportunity to show us the best version of you!  You can apply through the application form or send us an audio recording or video submission.  The deadline for submissions is Friday 16th October.

Please continue to check this page as new information will be uploaded frequently.

On Friday 30th August Metro Blind Sport are working with Airbnb Experiences to help launch their Inclusive Adapted Experiences event which includes two weeks of sport and physical activities to help increase the opportunities for people to access more inclusive activities whilst travelling.

Metro Blind Sport welcomes you to come and take part in two taster sessions, visually impaired football and cricket that will be provided by us for free!

As a reward for coming along, one lucky participant will be entered into a draw for a ticket to attend the evening event at the Shard for a live Jazz concert along with drinks and canapes!

Please register your interest with our Sport Development Officer, Charlie Raven at charlie.raven@metroblindsport.org by no later than Thursday 29th August at 1pm.

Full details of taster sessions are as followed: