My aim in interviewing Jenny Sealey was to encourage VICTA members, who, like me, have a love of, and aspire to a career in, the Performing Arts; who, hopefully on reading this interview, will be inspired, and realise that while resilience is needed, the doors are opening to them.

Jenny Sealey has been the artistic director of the Graeae Theatre in London since 1997.

For 20 years now, she has been at the forefront of fighting for the equal treatment of disabled people seeking careers in the Performing Arts. She is both an advocate and an activist, directing a continuous programme of fully inclusive performances, writing books and speaking publicly both nationally and internationally, about the need for change and an accessible ethos throughout the industry, from auditioning through to a complete range of careers in the performing arts. Her ability to dispel stigma and bring recognition to the successes of the disabled community within mainstream creative industries is eroding barriers. The adjustments and strategies she has developed are being adopted more and more widely, opening the doors to a full and equal inclusion for the disabled.

What inspired you to be involved in an inclusive Theatre Company?

JS: Well I’m deaf. I became deaf when I was seven and there were no role models or anything like that out there.

After doing performing arts at Middlesex Poly I discovered Graeae… and Graeae Theatre was and still is the UK’s prominent disability-lead, deaf and disabled theatre company. So it was a place where I auditioned, and where I met many, many, deaf and disabled women for the first time; it was then an all-women project.

Shortly after arriving, it felt like I had come home and knew I’d found where I belonged! It’s been my home ever since really and, although I’ve had other acting jobs, I’ve always come back to Graeae. To cut a long story short, I came back to Graeae as Artistic Director, 21 years ago. I’ve always been involved in disability arts, that’s the nature of being a disabled theatre practitioner.

How did you determine your approach to begin adapting such a timeless art form? How did you come up with a way to adapt scripts and deliver ideas through performances so that they could be understood and taken forward by people with a variety of different disabilities?

JS: With any production a director has to be really inspired by the play and the next, best bit, is to cast it. I always have big, workshop auditions and never cattle markets where it’s one in, say your lines, and you’re out. So, we do a workshop around the theme for the play because it is all about getting a team together, as well as getting the best people for the best cast. Whatever impairments that cast has informs the next layer of how we start to translate the play as it were. So with deaf performers, the process is to translate it into British sign language.

Focusing on visually impaired actors, what changes do you make to scripts to make them fully accessible? Could you give me some examples of the types of adaptations e.g. to the stage, that you commonly have to make?

JS: Well with a script I don’t change anything. A script stands, it stays. With actors, like the late Tim Gebbels, who was my Alsemero in The Changeling, we didn’t change any of the script. We worked very carefully with the designer considering the layout and the texture of the floor and the layout of lighting, and any other verbal cues, so that Tim then had complete free range to march around the set as he wanted, with no one guiding him. There was a moment with actress Beatrice Joanna, who is also visually impaired, where she grabbed him and there was a fantastic moment in rehearsal where they went to kiss and completely missed each other. You had to be there, they laughed and we laughed, it was brilliant.

A long time ago we did ‘A Lucky Sunday for Creve Coeur’ by Tennessee Williams and a blind woman called Elsa Farey was cast as Helena. From memory I asked her if she was going to play Helena blind, and she said “well I am blind Jenny.” I asked if Helena the character is blind? “No of course she’s not blind, there’s nothing in the script Jenny that says she is blind, but what I will bring to it is my blind sensibility and how I move around the set. I can’t change it, that is me and that is how I will be.” Elsa knew it was eight steps to the settee, four steps left, four steps right, she knew her layout and stage management. If they got that settee one centimetre out, she’d say “excuse me, can this be re-set?” She was on it. What she brought to the role was a stillness and quality of listening that she had and that started to become embodied within the character. So, we don’t change things, but as we engage with the character and the manifestation, the changes happen automatically.

I can relate to what you say about adapting the stage more than the script because in a production of Oliver at a mainstream school, I played Mr Bumble who runs the orphanage and the director had never worked with anyone with a visual impairment. So, as well as counting steps, he also gave Mr Bumble a ‘fag’, a small boy who took notes for him, and looked as though he was taking notes for me, but was actually making sure I didn’t fall over props.

JS: I think as blind or visually impaired people, I think your sense of space on the stage can be greater than sighted people. We had a guy named James O’Driscoll in our play ‘Whiter than Snow’ and the set was quite a high-up round structure which came apart in different formations. Nails were hammered in around the edges so James could feel where the edge was but he knew his way around that stage better than any of us. He knew, he remembered it all, and we’d all go “oh, thank God for you James”.

I think you have to be able to quickly get a sense of your surroundings, your parameters and then give yourself the permission to be free within that. Sometimes I think fully sighted people don’t see the parameters and therefore get lost, and they don’t stay focused. There’s something about how we learn from each other with our different sensory impairments; every person with their own impairment has a perspective of seeing the world, of entering theatre – it is a fascinating process.

Read more from my interview with Jenny and how the Graeae Theatre is promoting inclusion in the theatrical arts in Issue 2 of STRiVE. 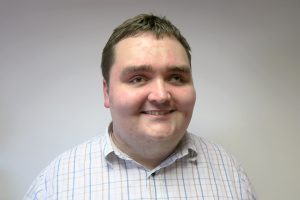 Photo of Robert WoodRobert is 20 years old and after spending the first five years of his life in Kent, he moved to the island of Borneo where he lived for 14 years. In Brunei, Robert attended an international school and was the youngest lead role in a school play, at the age of 6. Performing Arts has remained his passion to this day. When he lost his sight due to a hypothalamic brain tumour, Robert had to develop his own methods in order to pursue his passion for acting, writing and singing. Working with directors, he was able to play parts that were adjusted to fit his visual needs.

Subsequently, Robert trained to run acting workshops for visually impaired actors and those with additional needs. This resulted in a great deal of self growth as he had to be flexible and adapt the way that he taught in order to engage the VI students and successfully enable them to overcome any feelings of inadequacy, and build their self-esteem and technical skills.

As a VICTA Young Ambassador, Robert intends to research and publicise accessible opportunities for young VI people. His aim is for everyone to be supported to achieve their full potential and ensure that no one is side-lined due to impairments; for the world to embrace young VI people and optimise their opportunities to smile and to shine.