original article from on www.lta.org.uk

It was celebrations all round at the 2019 International Blind Tennis Tournament in Benidorm as Great Britain walked away as the highest medalling country out of the 15 nations competing. Managed by the LTA, the eight-strong British squad finished the challenging four-day tournament on a high, winning an astonishing three golds, two silver and two bronze medals between them.

Taking place from 12 – 16 June, the tournament saw over 70 players from 15 different countries competing to be crowned champion of their division. Taking to the court across four different sight categories – B1 (blind) to B4 (partially sighted), Great Britain served up an outstanding victory, walking away with the following:

With ambitions to become a Paralympic sport in the future, visually impaired tennis is adapted from the full court version to a smaller court, with a lower net. It also uses an audible ball so players can hear it bounce and being hit, and, depending on an individual’s sight level, they can also be allowed up to three bounces before they must return it back to their opponent.

As part of its disability work, the LTA supports and promotes visually impaired tennis in Great Britain, including delivering regular weekly and monthly sessions as part of the LTA’s disability open court programme, subsidising camps to help players develop their skills and running a series of regional and national tournaments for blind and partially sighted players of all abilities.

“What a result! We are absolutely thrilled with the team’s performance at the International Blind Tournament. To walk away as the highest medalling country is an amazing feat and I feel incredibly proud of all of my team. Blind and visually impaired tennis is one of the fastest growing versions of the sport, and we hope the team’s victory will inspire others to pick up a racket at one of the many sessions supported by the LTA across the UK.”

James Currie, who won silver in this year’s B2 Men’s category commented:

“It was an honour to play in the third International Blind Tennis Tournament and the standard of tennis has greatly improved from last year. There was a great team spirit all week!”

Amanda Large, who won gold in the B2 Ladies category added:

“What an amazing week of tennis! There was a great team spirit, determination, friendship and camaraderie throughout.  It was an honour to represent my country and I am over the moon to become B2 ladies world champion for the second year in a row.”

I got a chance to compete in the World Championships of VI Tennis for a second time, this time around in Alicante Spain. I arrived on the 9th of June and returned back to the UK on the 16th. The seven glorious days I spent there involved chilling in the hotel and the internal water park, practising before the tournament and actually playing! the first two days were full of classification which left me with lots of free time as I am classified as a B1 for life.

My category of B1 males had 20 people from several different countries. The tournament overall had 87 players from 15 countries and six continents, and I was the third seed for the draws. My opponents at the group stage included Italy, Germany and Ireland. I luckily won all my matches by breaking serve and consequently avoiding a tie-break. I came out at the top of my group and then played in the quarterfinals against Argentina.

I won that too and played my semi-final against the worlds number 1 from Japan, which I lost 6-3. However, I gave my great opponent a tough time, and we hugged each other after the match was over. I then went on to play my 3rd and 4th play-off match against another German opponent which I won 6-3. That left me in third place and given that my group was the biggest (20 people), I am very proud of coming 3rd.

Moreover, most countries had managers and coaches who worked with them before and during the tournament, a luxury that I wasn’t afforded as I was the sole representative of my country. As there were eight courts beside each other, quiet was a luxury, but I gave it my best and really enjoyed the experience.

It was great to see so many players and such good tennis in many instances. The overall vibe was also great despite some issues, and I thoroughly enjoyed myself with the GB team that adopted me and also met many players/officials from other countries that I had met last year. I had a great time and would love to go year after year, becoming the world champion soon!

I must say a massive thank you to Metro Blind Sport, Highgate Tennis CLub, the Globe and Stanmore Jaffaries for helping me improve my game and also sponsorship which allowed me to go to Spain and also do well.  I hope to make you all even prouder and hope to become an even better player who consistently does well!  –  article by Naqi Rizvi

Help Naqi raise some funds for not on but 2 Charities

Naqi” I’m abseiling 156m down the Iconic 1CP Building for The Lord Mayor’s Appeal because mental health affects each one of us!”
Link to donate: https://blindsport.uk/MentalHealthDonate

Naqi’s 2019 Prudential RideLondon Surrey 46 page
To help contribute towards research and Raising funds for Children with Cancer UK because I want no child to suffer from this disease
Link to donate: https://www.justgiving.com/fundraising/naqi-rizvi

Eight British visually impaired tennis players have been selected to compete in the 2019 International Blind Tennis Tournament in Benidorm next month. Last year Great Britain clinched an impressive six golds and one silver medal and will look to return this year with more.

Organised by the International Blind Tennis Association in partnership with Sound Tennis Foundation, the tournament is running from 12–16 June and will see over 70 players from 15 different countries playing over the course of the week. With emphasis placed on inclusivity, the tournament is open to players from B1 – B4 classifications, with B4 players’ part of the official competition for the first time this year.

Led by Head Coach Louise Assioun, the following British players have been selected for this year’s squad:

Speaking ahead of the event, Claire McCulloch – Disability Competitions Manager at the LTA, who is managing the GB team said: “We’re thrilled to be heading to the International Blind Tournament for the third year in a row. Blind and visually impaired tennis is growing as a sport and after last year’s success in Dublin, we’re excited to see what this year will bring. We’re hoping our GB players will inspire the next generation to pick up a racket at one of the many disability tennis sessions supported by the LTA across the UK”

Echoing McCulloch’s sentiments, Head Coach Assioun added: “I am proud and excited to be accompanying the GB VI Team as we head out to Spain for the third World Championships. Building on last year’s performance – where the team won six golds and one silver, we hope to take advantage of our experience to achieve similar success, as we continue to demonstrate the strength and depth of the sport in the UK”

With ambitions to become a Paralympic sport in the future, visually impaired tennis is adapted from the full court version to a smaller court, with a lower net. It also uses an audible ball so players can hear it bounce and being hit. Depending on an individual’s sight level, they can also be allowed up to three bounces before they must return it back to their opponent.

It was a highly successful second day for the B2 and B3 members of the Great Britain vision impaired tennis team on Tuesday with 11 wins out of 12 round-robin matches, including one walkover, in Spain.

Glasper had a tough time against Adrianna Sanchez in her second B2 women’s singles matches with the Mexican player winning 4-0. However, Glasper finished her opening day of international competition strongly, beating Ireland’s Claire Whelan 4-0.

Brenda Cassell had a super day, winning all three of her matches 4-0 to top her round-robin pool. Cassell defeated Rosion Demody of Ireland, Poland’s Kamila Wroblewska and Genemarie Richards of Australia.

David Deas followed suit in his B2 men’s singles pool, also winning all three of his round-robin matches without dropping a game. Deas beat Jonny McInerney of Ireland, Germany’s Dennis Scherer and Ju Sang Kim of South Korea to complete a fantastic day for Britain’s B2 players.

It was also a perfect day for Chris Baily in the B3 men’s singles after 4-0 victories against his two Australian opponents, Michael Fogarti and Adam Fayad.

Baily shook off a few errors in the opening game against Fayad to earn a comprehensive victory and top spot in his round-robin pool. Baily was scheduled to meet Candido Alessandro of Italy in his second match of the day, but Candido had to withdraw from the tournament due to injury.

After winning two of his three round-robin B1 men’s singles matches on Monday’s first day of play Nikhil Nair slipped to a narrow loss in his final pool contest against Alejandro Zacares of Spain.

Zacares made some important returns of serve towards the end of match to prevail 5-3.

There was another close finish to Yvette Priestley’s last B1 women’s singles pool match against Mexico’s Anna Arenas, with Arenas winning an exceptionally close contest 5-4(3).

Read team profiles in a PDF

Odette, the Chief Executive of SELVis – a part of the Pocklington family  and our Metro Blind Sports Tennis lead– will be one of 70 players from 14 countries, including six players from Great Britain, taking part in the tournament.

Organised by the International Blind Tennis Association, the tournament will take place in Alfaz del Pi in Spain from May 6-11.

At the end of the event, the first ever blind tennis world rankings will be established.

Blind Tennis, also known as Soundball Tennis, is played on a smaller court than standard tennis with a sponge ball that makes a noise when it bounces. The standard rules of tennis apply with a few modifications, including being allowed three bounces if you’re totally blind and two bounces if you’re partially blind. 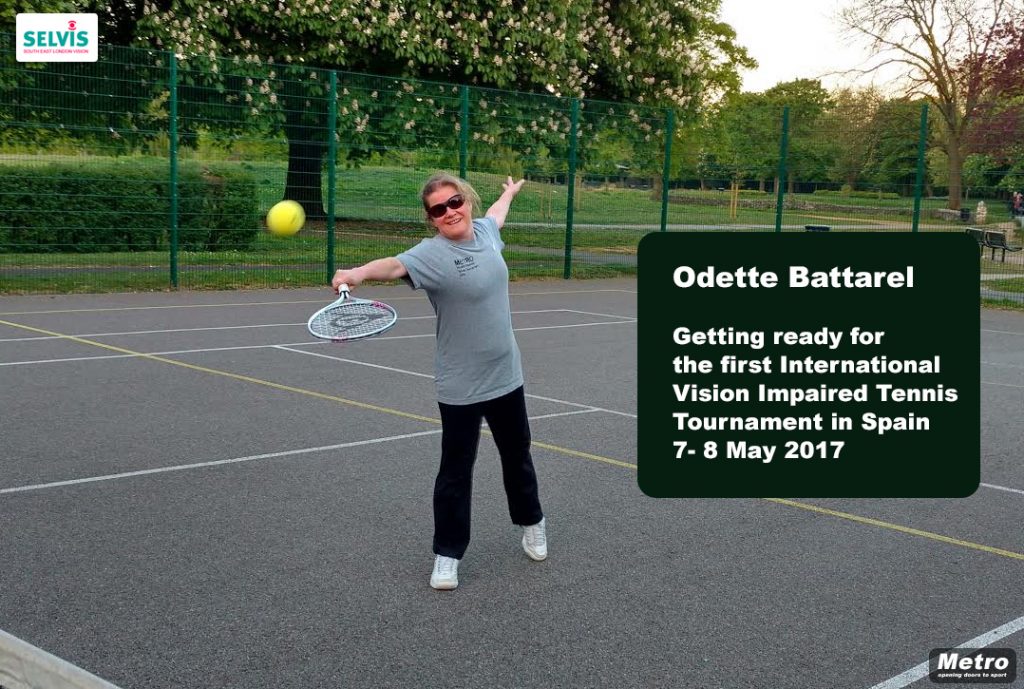 Odette, a former blind tennis champion, said she was honoured to be selected to play for France.

“This is the very first International Blind Tennis Tournament. It means the start of the road towards the Paralympics. I hope that one day this sport will be Paralympic,” she said.

Odette has been playing blind tennis for 10 years and has helped introduce the sport to Germany and Ireland.

She said the sport was a great way to keep fit, meet new friends and meet players from all over the UK.

“The international event will help promote the sport and hopefully encourage more players to take it up, more coaches to coach, and more funding to help with the cost of running local clubs.”

We wish Odette, and all of the players, all the best in the first International Blind Tennis Tournament!