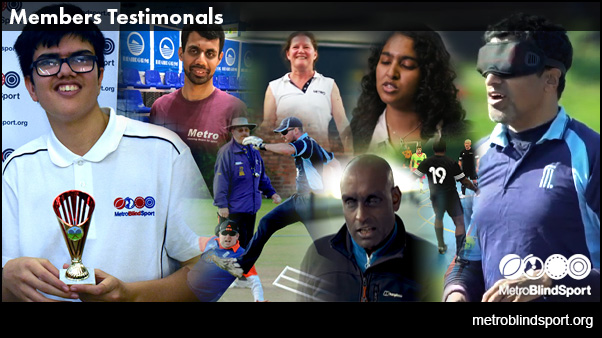 “Metro Blind Sport changes lives.  Sport delivers many social, physical and mental benefits helping participants lead a more fulfilling, healthy and happy life both on and off the field of play.

Masuma, a member from Ilford

‘What I really love about tennis is that I can play a sport that other people do, and I think that being on the tennis court is a really safe environment.

The enjoyment comes from being able to socialise with other people, the ability to stay fit, not having to take it seriously unless you want to.

The thing I love about tennis is that, obviously being blind, I have never previously participated in a team sport and this is first time I have been able to do it.’

Hassan, a member from Wandsworth

‘I didn’t just discover cricket at Metro Blind Sport, I discovered independence, freedom and a new lease of life. Cricket became the vehicle to greater things in life, such as university, volunteering, employment, living on my own and the greatest achievement of all, representing my country.’

Feedback on the Athletic Open 2019

How was your experience at the Metro Blind Sport’s Athletics Open?

It was really fantastic. Everyone was so supportive and kind and everyone seemed to be having so much fun. Being with all these people like me or who had more serious sight problems, competing in all these events was amazing and I didn’t feel so alone anymore or question myself if I was good enough or not normal enough. It would be nice though to run against more girls my age or older.

What advice would you want to pass on about your athletics experience to people who are blind or visually impaired?

It can seem really frightening at first trying to run or jump or throw without really being able to see where you are. My first race was a disaster, all the lines blurred together and I saw a big blur of people on one bend and thought it was the finish so I stopped not realising I still had 100m to go. But If you take the first step and stick with it the feeling when you run and finish a race is unbelievable and I feel like I can do anything then. The same with the high jump. When I started I could hardly get over 1m now I get 125 sometimes 130. I’ll never win a normal competition but I love trying to go higher and the feeling of flying is awesome. I definitely recommend starting with Metro sports as they are so much fun then if you want to continue more seriously find a good supportive club

Would you recommend the Metro Blind Sport Athletics Open to others? If so, why would that be?

Most definitely. It was so much fun and the organisers, volunteers and athletes were so amazing. They support everyone and the encouragement you get is overwhelming. The standard of athletics is also very good, much higher than I expected and some of the people there and who I raced against were as fast and as good as sighted people. but mostly the atmosphere is really special – everyone finished their race or event no matter how hard they found it and the pride everyone felt for doing something like this was incredible and empowering. It makes you realise that things for us may be hard but they are not impossible, we might have to do things a little differently and it might take us a little longer but we can still do it, just as well as anyone else

Harish, a member from Brent

“I would thoroughly recommend swimming to visually impaired/ blind people. It is a good way to improve physical and mental wellbeing.  It can be very enjoyable and a very useful life skill.’

Nick, a member from Brixton

“I was pretty sedentary and mainly in the house all of the time as I worked from home. Cricket with Metro has been to get be out an about and to have social interaction and be part of a team.

I love it, I find it really welcoming, a good bunch of people and great support. Cricket has helped me to get out more and not worry so much about travelling. It’s bought me out of my shell.”

“It’s a chance to meet people, volunteers and players and have a joyful day. Through volunteering, I had a different outlook on VI individuals before, I thought that they would need a lot more assistance.

They really surprised me, in the best way possible, that they could really do anything that anyone else could do. They just prove to me how able they are.”

Everton, a member from  Barnet

“Playing futsal has improved my fitness, my discipline and improved my confidence by moving around the pitch with a visual impairment. It is something that allows you to interact with others positively.

Everyone welcomes you, you immediately don’t feel like a stranger. It’s improved my confidence to play a sport I love. It’s all about having fun.”

“It’s very exciting, you get to meet a lot of people and it is fun. At this tournament, the volunteers and staff are excellent, it’s a very thrilling process to play my first match.

Tennis has made me go out much more, my family can now join in, it’s revolutionary. If you are thinking about tennis it’s definitely something to try and it could change your life like it has mine.”

Matt, a member from Buckinghamshire

“Metro allows you to play a sport that had previously been inaccessible. Until I was 16 or 17 I went to a mainstream school and only knew one other Vi person. Since then, I could name 200 people I have met through playing sport.

“I love bowls because it gets me out every day if I wanted to. It makes me meet lots more people. The advice I would give someone taking up bowls is come along and give it go, but be aware it might take over your life like it has for me.”

Haren, a member from London

“I like to think as the ‘Stoker’ we do all the work, we are like the engine room of the tandem, we’re setting the pace for the bike and the ‘Pilot’ is always steering and doing the gears.

What I like about cycling is the whole experience. I know that when on a tandem I can let myself go and put my foot down. I especially like getting out into the countryside on the roads, I love it.”

Odette Battarel,  a Member and Sports Lead from Croydon

“I would like to say a big thanks to Metroblindsport for supporting me to take part in the 3rd International Blind Tennis Tournament that took place in Allicante, Spain this past June 2019.

It was an amazing experience, I was able to play against players from Germany, Italy, Argentina, Mexico, Ireland and the UK! I won some games and lost some, and came 4th in the world in the B3 Ladies singles.

It was very exciting and a great honour to be able to take part in such an international event, it had the feeling of taking part in a para Olympic!

It was fun and very interesting to be able to meet other blind and partially sighted people from all over the world and exchange ideas and a love for tennis.”

Naqi Rizvi,  a Member from London

“It was great to see so many players and such good tennis in many instances.

The overall vibe was also great … and I thoroughly enjoyed myself with the GB team that adopted me and also met many players/officials from other countries that I had met last year. I had a great time and would love to go year after year, becoming the world champion soon!

I must say a massive thank you to Metro Blind Sport, Highgate Tennis Club, the Globe and Stanmore Jaffaries for helping me improve my game and also sponsorship which allowed me to go to Spain and also do well.

I hope to make you all even prouder and hope to become an even better player who consistently does well!”