Katie started swimming as a baby. She loved the water and was always very confident in it. When she was a toddler she attended learn to swim lessons at her local pool. By the time she was 5 she could swim some lengths in the deep pool unaided.

In fact it was that year’s holiday to Center Parcs that helped us to realise that Katie perhaps had a special talent for swimming. We were queuing up to go on a water ride there when the lifeguard told us off and said that the ride was only for people who could swim. We told him that Katie could swim and he asked us to prove it by making her swim in a part of the pool that had a very strong current.

Katie swam and the lifeguard was very impressed he said he had never seen a 5 year old swim so well. It could have been his first ever day for all we knew but still it was enough to make us enquire back home about joining the local competitive swim club. By September she started at the competitive swim club in their stroke development section. It was a daunting place full of lots of very, very talented sighted swimmers. 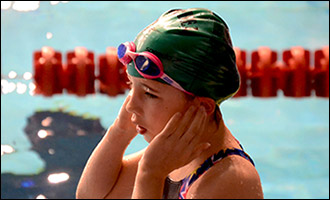 It wasn’t until Katie was 8 that she got a place in one of the club’s competitive swim squads. When she was 9 she had her first taste of para swimming when I took her to a regional disability swimming have a go event. It was here that Katie’s talent was picked up and we were encouraged to enter the Disability swimming nationals that November in Sheffield. Katie had never swum in such a big competition before.
All the top athletes were there. Katie was the youngest swimmer and she got disqualified in two of her 4 events and she didn’t win any medals. It was a huge learning curve but she wasn’t put off. In the following March still only 9 Katie attended the National Junior Disability Swimming Championships.

Here Katie competed only against children up to 13 and this time she had more success. She came away with 5 Gold medals. After lots more competitions that year both disability and able bodied, Katie received a letter from British Swimming congratulating her and telling her that she had actually made the qualification times for the World Class Podium Potential Program however as Katie was only 10 and the program only accepts athletes at age 12 they would offer her instead a place on the England Talent Program. This program picks up talented disabled swimmers and supports them on their swimming journey. 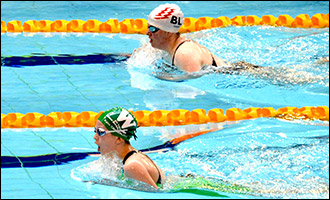 In March 2015 Katie qualified for 5 events at the British Para International Swimming Championships in Glasgow. This was the biggest event Katie had ever attended and she was once again the youngest there. The best bit was racing against other athletes from around the world. Katie watched in awe as some of her friends that she had made in her year and half of disability swimming, made it through to finals and some picked up medals.

Although Katie had medals from other competitions she had never made finals and never had her medals presented on a podium before.By December 2015 she final got one of these experiences when she was presented with 2 silver medals and a bronze medal on the podium at the South East Regional Winter Swimming Championships. 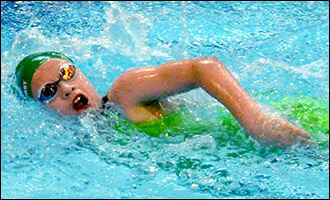 In April this year Katie at last got the chance to experience finals when she qualified for the Paralympic trials in Glasgow.

She made it through to 4 finals out of her 7 races. That was a magical experience. So its been a long and bumpy journey into disability swimming over the last 2 and a half years. It’s a tough sport and there are other visually impaired swimmers out there that are faster and better than Katie but she has enjoyed the experiences that swimming has given her and she is hanging on in there hoping that one day she will get her wish of being on team GB and representing her country, hopefully, maybe if she’s really lucky that will be at the paralympic games.

So why do you need to know all this I hear you ask?

Well you don’t but its relevance is that Katie usually attends the Metro Games each Summer. It’s a fantastic event that we have always loved coming to. In 2012 it helped excite us about the Paralympics and every year it offers an opportunity for visually impaired people to come together and compete in a friendly and rewarding atmosphere.

The Metro Games stands there just at the time that our children are having to compete against their peers often at a mainstream school in summer sports days and Metro Games gives them that thumbs up that ‘You can do this’ feeling that lasts and spreads within our children.

We can’t make it this year due to our swimming commitments and that makes us really sad. So those than can make it please go out there and pick up confidence and show the world that you can do what ever you set your heart on. Yes there will always be someone better but remember your on your own journey with your own goals and no ones journey is quite the same.

Good Luck to everyone at Metro Games this year!