At the end of June 2015 Blind Cricket England and Wales Chairman David Townley, DT as he liked to be known, passed away at the age of 63 and the Blind Cricket community was quick to pay tribute.

DT’s sight began to fail him in his mid 40’s but his love of art, photography and sport continued leading him to try visually impaired cricket. As a B1 player David was a bowling all rounder for London Metro for around a decade and for several of those years he was the team’s captain. He won multiple league and cup titles and he still holds the record for the highest score by a B1 player in the BBS Cup Final

In 2004 he made his international debut at the start of the first ever Blind Cricket Ashes series during which he helped England beat Australia 3-2. A tour of Sri Lanka, a home series versus Pakistan and the 2006 World Cup in Islamabad followed as DT earned 18 England Caps and took 14 wickets for his country.

In 2007 DT became chairman of BCEW and added the title of President of the World Blind Cricket Council from 2010 to 2012. During this time David helped forge close links between BCEW and ECB, he started the Twenty20 Cup Competition and helped build BCEW into a strong, well managed charity.

In recognition of DT’s many on and off field achievements BCEW have announced that he will be the first of this year’s three inductees into the Blind Cricket Hall of Fame.

We are also proud to be able to announce that effective immediately we have renamed our T20 competition. It will now be known as the BCEW David Townley Memorial Twenty20 Cup 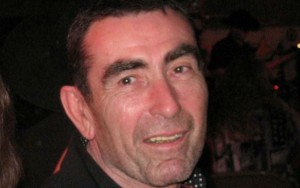 “It’s fitting that the Twenty20 Cup will now be named after DT,” said acting BCEW Chairman Dave Gavrilovic. “DT started the competition and even when he was having health problems he continued to organise T20 finals day every year. When we discussed the idea of renaming the tournament in his honour the response from everyone we spoke to was almost identical word for word, the Twenty20 Cup was DT’s baby.”.

Many others have paid tribute to DT since his passing was announced.

There were minutes silence and minutes applause held at a number of games including Berkshire Stags v Dorset Dolphins as pictured. 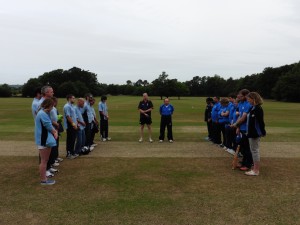 England and Wales Cricket Board Head of Disability Cricket Ian Martin told the ECB website: “David Townley was an exceptional administrator and passionate about Blind Cricket. He was a visionary and a selfless individual.

“His priority was ensuring that this generation of Blind Cricket administrators and players work tirelessly to ensure that what they leave behind is in a better position than what they inherited. I think that with more Blind Cricket teams than ever before and a successful and fully resourced England Blind team, he can rest in the satisfaction that his legacy will live on.

“There is no doubt that blind cricket and the wider disability cricket world is a poorer place for his passing.”

A number of clubs, officials and players as well as friends of the game also wanted to pass on their thoughts and we list those below:

This is awful news, I am filled with shock and grief for a truly wonderful and gentle man. Cricket and in particular VI cricket is indebted to David’s foresight and endeavour in getting it to where it currently sits.

He will be deeply missed, my condolences go out to his family and friends.

This is terrible news.

Please accept and pass on my condolences on behalf of everyone at Final Third. So sorry to hear this sad news.

This is terrible news.

A great man and one whose presence and wise counsel will be missed by us all.

This is really sad news. Our thoughts are with Dave’s family, friends and

Sincere condolences from all of the growlers.

Very sad to here the news about DT, a man who always had time to help when it was needed or just for a chat, a great man will be missed

Phil and the Nottinghamshire Knights VICC

A kind, generous, thoughtful and truly inspiring man. Who will be truly missed

We were very sorry to hear the news.

I would like to pass on the Dorset Dolphins regrets and sadness to his family.

DT was a huge figure in the blind cricket world and all of us who had the privilege to know him will miss him.

It is a real real shame.

A truer gentleman of the game you’ll not find.

I’m really sorry to hear about the passing of David Townley.

Please accept and pass on, on behalf of everyone at Somerset VI Cricket, my condolences to everyone that knew DT, everyone at Metro and of course his family.

Please accept our condolences on the passing of David Townley.

Our thoughts and prayers are with you all at BCEW, and David’s family.

Our most sincere condolences to DTs family and friends on behalf of everyone at Warwickshire Bears.

This is very sad news. I was introduced to David at the time when I was considering running a club from RNC. He was instrumental in getting the ball rolling and facilitated our contact with John Garbett. I remember him as an engaging man with a passion for VI cricket. Please add our condolences to the many you will receive.

Great sadness has been expressed by all committee members of WBC and equally great and generous tributes were paid to him.

I was asked to pass on special and whole hearted thanks from Indian, Pakistani, South African and Australian blind cricketers as well as the personal condolences of all Committee members.

It was a pleasure to get to know DT. He put his heart and soul into Visually Impaired cricket and touched so many lives in doing so. He will leave a void in our game. He is a great loss.

On behalf of the whole squad please pass on our love and condolences to his family.

What sad news. My deepest condolences to all his family and friends.

I am very sad to hear of the news which has been passed on by Ian Martin. I knew DT for such a short space of time and in fact, when we next met I was promised an insight into his endeavours in the music industry (over a couple of vodka and tonics!); there was always a story to tell and that’s what I’ll certainly remember him for. I have viewed it from afar but the impact he has provided to recreational cricket and the national game has certainly made a long lasting impact that we everybody can sustain.

He’ll certainly be in my thoughts and for those close to him and his family I offer my sincere condolences. I will also miss the great photographs he too as well, that captured of the essence of what he worked so passionately to promote.

What a sad loss.

A very very sad loss to the blind cricket community. A visionary, a font of knowledge and a bloody good bloke. RIP DT.

It is indeed very sad news at the passing of David Townley. We all at Lancashire Lions would like to offer our deepest and sincere condolences to his family and friends.

David’s hard work and commitment to BCEW was unquestionably superb and he will be sorely missed. A great ambassador for the game. I’m sure it must be difficult for you guys that served on the committee with him.

Undoubtedly a legend. Long may live his legacy.

DT was a brilliant man. A great team mate, mentor and player but above all a dear friend. I’ll miss him eternally. RIP DT.

Such sad news. I never knew DT on a personal level but I occasionally spoke with him and I know a huge void will be left. Very very sad news.

DT – eleven years ago next month we made our debut together. You were the ultimate ice man. RIP buddy – you will be sorely missed X.

Such a great guy, always pleasant to talk to and be with.

I’ve only really got to know him over the last seven summers at the BCEW Finals. It was always a pleasure to stop and chat with him during the finals matches about photography, music, art and of course cricket.

Very occasionally we would chat at length on the phone about camera equipment and how best to take cricketing pictures etc, which he succeeded in doing very well despite his sight problems.

My most sincere condolences to his family and friends, a truly sad loss to them and the rest of us.

BCEW will never quite be the same again, though I’m sure because of David’s legacy it will go from strength to strength.