An outrigger canoe is Polynesian in origin.  It is a stable six-person boat that is paddled on both sides.

We will be running a session for beginners with visual impairments on 16th September at 10.15am.  If you want to bring a friend or someone to accompany you they are very welcome.   The session will last about 60 mins.

What you need to know

It is essential that you book a place on the course so that we can ensure we accommodate your needs.  Bookings will be on a “first come first served” basis.

A blind tennis player has made amazing progress from beginner to one of the best in the world – in the space of two years.

He only started playing VI (visually impaired) tennis in January 2016.

Naqi told the Ham and High: “I never expected, in my wildest dreams, that I would be number four in the world. It was amazing.”

Naqi trains at Globe Tennis Club, in Haverstock Hill. It’s here where he has been able to progress since joining in November last year.

He explains: “I did VI sessions at Islington Tennis Club but that was only once a month.

“I was really, really keen to get more practice and thought I’d give it a go at Globe. Rob Deane, who’s in the committee, was very welcoming and arranged for volunteers to play with me.”

The club now puts on fortnightly VI sessions, and Naqi is able to practise at least once a week.

He continues: “Being able to practise weekly is a massive help. I can now work on the things I want to work on and get to meet new people.”

Naqi is classified as a “B1” player, being completely blind.

Players are allowed up to three bounces and the ball makes a sound. The net is also lower, and players have to ask their opponents if they are “ready” before a serve is made.

With experienced players, rallies of over six shots are possible – something which Naqi achieves regularly in sessions at Globe.

The club sponsored his tournament trip to Dublin, where he lost to the world’s number one in the semis. 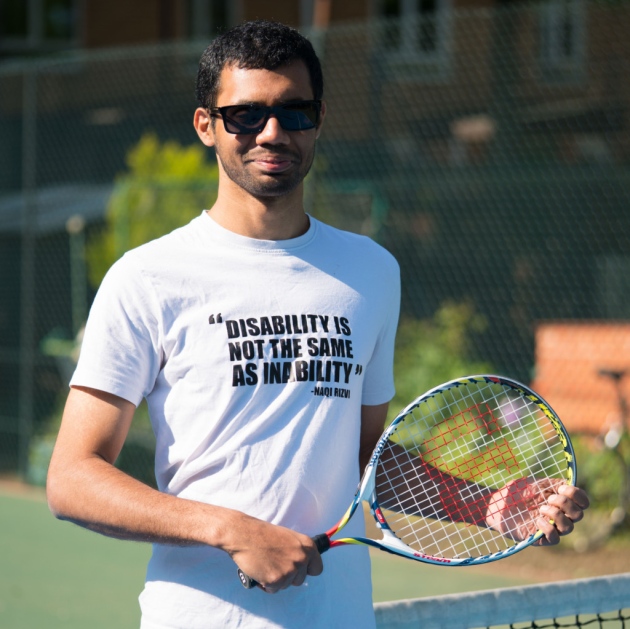 VI tennis player Naqi Rizvi at Globe Tennis Club in Belsize Park. Picture Siorna AshbyNaqi recalls: “My attitude in Dublin was to relax and enjoy. And the last two matches were the best I played.

“If I had the opportunity to play every day, I would. The only factor I have to consider is the weather – the natural elements can be a big factor as VI tennis balls are very light.”

For more information about VI sessions at Globe or to volunteer, email globeltc.tennis@gmail.com

Entries are now open – you can enter by clicking on the following link – https://www3.lta.org.uk/Competitions/Competition/?ctn=1-HA7LSRS  Please remember you can only enter one event at a time so once you have done the singles you need to click on the link again to do the doubles.  If you have forgotten your login details just let me know.

Volunteers needed!  If you know any volunteers who would be willing to help out during any part of the weekend please can you ask them to contact me or let me know their details & I can get in contact with them.

We are holding an official tournament dinner at the Link Hotel on Saturday 20 October.  Details are:

Entertainment: music will be provided!

Please confirm if you will be attending the dinner by Friday 21 September.  Please give details of any guests attending at this time too.  Payment can be made nearer the time.

It’s going to be a super weekend so sign up NOW!

Venue:
Sailing from Oban to Oban, Scotland
Time:
N/A - N/A
Phone:
01908 240 831
Date:
31st August 2018
Cost:
£900 (This can be paid in monthly instalments of £100 or via fundraising). Costs cover accommodation, bedding, all food and wet weather gear while on board the tall ship
Contact:
activities@victa.org.uk

VICTA is partnering with the Jubilee Sailing Trust to give five adventurous souls the chance to embark on a voyage of a lifetime!

Jubilee Sailing Trust are the operators of the only two fully accessible tall ships in the world, on which we are delivering a sail training voyage for blind and partially sighted adults, aged 18 to 29 years. Being on board one of these remarkable ships will be a phenomenal experience designed to help build the confidence and resilience of those joining its crew.

Date: 17 to 23 June 2019  Age: 18 to 29 years
Duration: 6 nights on board the tall ship
Location: Sailing from Oban to Oban, Scotland
Cost per person: £900 (This can be paid in monthly instalments of £100 or via fundraising). Costs cover accommodation, bedding, all food and wet weather gear while on board the tall ship.

VICTA is subsiding this trip for our participants but you will need to raise the remaining amount of £900 to participate. We would encourage you to fundraise to support the cost of this voyage. We are advertising this opportunity early to give you the chance to raise the funds to reach your target. Five volunteers will also be fundraising for themselves from our corporate sponsors Highfield, in order to provide a one to one level of support on-board.

You don’t need any sailing experience to take part as you will acquire all the skills you need during the programme. To find out more about the voyage and The Jubilee Sailing Trust, please visit the website application page.

Applications close on Friday 31 August 2018 so please sign up soon via our website. If you have any questions please email activities@victa.org.uk or call 01908 240 831.

ECB have today announced a 16-man Visually Impaired (VI) squad for their upcoming tour of India.

The side will take on World Champions India in three IT20s before competing in a Tri-Series against India and Sri Lanka.

Sam Murray returns to the squad after taking time out of the sport to become a Para-Rower for Team GB. Darren Paddick has been called up for his first tour after impressing in the Academy and in domestic cricket. A captain for the tour will be announced in due course.

England will be looking to test themselves against two of the best sides in the world in the Tri-Series. All three teams made the semi-finals of the last IT20 World Cup in 2017, with India going on to lift the trophy on home soil.

“This tour is an exciting opportunity for our squad and the players to continue to develop. Our ultimate goal is to win the next World Cup and to do that we need to be able to compete against the very best.

“We feel that the 16 players we have selected all have the ability to win games for England. This trip will help push them forwards and we are looking to see how they perform under pressure against two great teams. We want players who can develop into World Cup winners.”

“This will be another important tour for the squad. Taking on two of the top sides in the world will give a great indication as to where they are as a group and the progress they have made.

“This tour is another step forward for disability cricket. Visually Impaired cricket in particular continues to grow internationally thanks to strong support across the global cricketing community and the work of the World Blind Cricket Council.”