Is often called Soundball Tennis and is played on either a badminton court or a standard tennis court using a junior tennis racket and an adapted sponge ball that makes a noise when it bounces. Balls can be either black or florescent yellow to give maximum contrast with the colour of the sports hall. Blind Tennis video link here

You can watch a video of Odette , our Metro Tennis Sport lead being interviewed about Sound Ball Tennis at the link below: http://www.youtube.com/watch?v=TGOjB5ZVSj4

Read about the Metro Annual Tennis Tournament 2013 and a new players perspective by clicking on ‘Articles’ in the Quicklinks box on this page. For an umpire’s view of the 2012 Tournament, Visit: http://www.csp.org.uk/frontline/article/viewpoint-tennis-anyone

To read about Miyoshi Takei, the inventor of blind tennis, visit:http://www.hanno.jp/matsui/

The Hackney Advice Service is a brand new offering, designed to provide parents of vision impaired children or vision impaired young adults over 16, with clear and sensible advice, in an easy hassle-free manner.

When you call the Advice Line you’ll speak to our advisor Erick, who can provide free consultation in areas such as:

We can also offer free, confidential, practical support for:

If you’re struggling to understand your rights, access what you’re entitled to, or manage your problems, Erick is on hand to help.

The spirit of Wimbledon carried on in Cambridge this weekend after a special tennis tournament for blind and visually impaired players served up a treat.

Thirty-two participants from as far afield as Newcastle, Brighton, Manchester and London came to Cambridge to test their skills.

Players from Cambridge were also among the big winners during the event at the Hills Road sports centre, taking a number of runners-up and winners medals across the different categories.

But the Vision4Growth charity’s tennis tournament was also marked by a spirit of camaraderie as well as competition, said Fiona Musgrove, one of the tournament’s organisers. 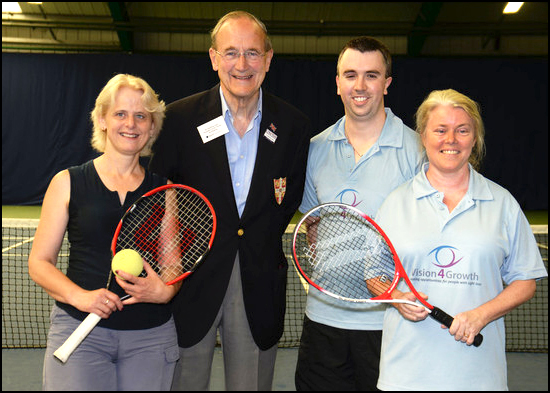 She listed a number of different groups who had lent their support: including representatives from the Dan Maskell Tennis Trust, Tennis for Cambridgeshire and the Tennis Foundation who were all in attendance.

Sir Geoffrey Cass, president of the Tennis Foundation and former LTA president, was present and said it was the first time he had seen a game of blind tennis.

Volunteers from the Cambridge Volunteer Centre, Hills Road Sixth Form and Anglia Ruskin all ensured the games ran smoothly, while there was also a variety of refreshments on offer, with the local branches of Sainsbury’s, Tesco and Subway all donating food for the occasion.

As all cricket fans know the true test of a cricket commentator’s skill comes on those wet, soggy English days when rain has stopped play for some time and further match analysis would be too boring so the talk has to turn to the quality of cakes delivered to the box by skilful well-wishers. Was this the inspiration behind “bake off”? This weekend saw games with a very different approach to the mid innings tea; at Berkshire the home side batted for the maximum number of overs to delay the time at which their cakes, whose reputation goes far and wide, could be enjoyed. At Highgate the innings declaration was delayed until the teas arrived so that a stiff target to win for the visitors became harder as Metro, already past 200, raced to almost 300 in the final three overs of a 20 over innings.

This weekend also saw two stand in captains and two teams of nine; or in the case of the Devils nine, ten, horror maybe eight, nine and ten. With Vijay added late to the squad neither he, nor Gary, appeared at Paddington in time for the train to Twyford – boarded by the rest of the side only by holding the doors open; resulting in a train announcement that the departure had been delayed as a result. Gary did get the next train but Vijay did not appear – the Devils final ten being the result of a loan from Berkshire to allow all the players at the ground to get a game.

Matt Dean standing in for Rory had a less stressful time as although he lost the toss and had to start the match short of one player this mattered not one jot and he and Mark Bond ran Yorkshire ragged on a blistering hot day in posting 290 without loss; Matt scoring 150 and Mark 86 – an innings impressive in the role of supporting Matt as it included just three dot balls in 54 deliveries faced. With a stronger bowling attack than at this season’s Northants game where Metro did not manage a win by bowling the opposition out – would 40 overs allow a victory? It was the first change bowler who struck first in the fifth over as Charles dived forward to grab an edge – caught behind; and then Bond was back in action at cover to run out the number three with a direct hit. The visitors were happy enough to be two down at a 10 over drinks break but disappointed to lose another wicket in the next over. When the bowling restrictions ended Ryan, first change, came back and secured the key wicket of the other opening batsman who was caught by Mo. This was the end of the beginning, or the beginning of the end, for Yorkshire as wickets then tumbled regularly with Ryan taking 3 for 30 and Mo 4 for 27; then Gareth nipped in with the final wicket to complete a 135 run victory.

Asif had a more successful time at the toss; and in another mirrored event Devils started their wicket taking with a catch behind off Alan’s bowling, in the third over, to remove the dangerous looking Kathryn Jelfs-White with Stags having scored just 17. Another wicket was harder to find in this game however – Paul Fisher did have to retire with the score one shy of three figures, but the score was 132 before Rob took the first of his two wickets to dismiss Camille. However, the visitors here were able to restrict the scoring – bowling and fielding well, so that only 40 runs were added in the final twelve overs and with David Burt grabbing an important fourth wicket in the final, twenty-eighth, over, were able to enjoy the fantastic tea feeling they had a good chance in the run chase to follow.

Gary opened with Asif; Gary hitting 8 boundaries, six more than in the Stags entire innings, before retiring with the score on 82 in the tenth over. Berkshire then pulled things back a bit as David Burt was bowled, Chris Lewis run out smartly by the home skipper who gathered a well hit drive from Asif and broke the wicket – with the runner backing up out of his ground, and Asif well caught in the deep at mid-wicket after just a little juggle by the fielder; 100 for 3 and confidence building in the fielding side. Well placed confidence as, after all, overs 10 to 15 had bought only 27 runs; but Alan and Eamonn were now batting together again – could they follow up on last week’s stand of 99? Indeed, they could be notching up 72 together to secure victory with almost four overs to spare. Talk now of the Devils perhaps being able to take the league title if they beat Surrey at Highgate next Saturday; while Metro might still have a chance of the National League title if they can win away in Sussex the week after.

Bhavini Makwana from Dagenham who is registered Blind and has an eye condition
called Retinitis Pigmentosa since 1997, is organising a charity fundraiser on
Saturday 3rd September 2016 at the City Pavillion in Romford. The “RPFB 40th
Anniversary Dinner & Dance” evening will comprise of entertainment by Master
Kunal from MK Roadshow, Navin Kundra, Shreeya Makwana, Kuntals School of
Bollywood Dance, Comedy from Planet Parle and Anil Desai, Hosted by Alpa
Pandya (BBC Asian Network) together with a three course dinner to help share
messages about sight loss amongst the Asian Community.

There will also be an enjoyable Drama Production staged called “No Fear, when loved ones are near”
supported by Honey Kalaria, Bollywood Ambassador to the UK and performed by a
cast of sighted, partially sighted and blind people. The drama incorporates acting,
comedy, happiness, sadness and dance to help deliver a moving and interesting
story written by Safia Manize.

Recently Bhavini was presented with the “Prime Ministers Points of Light award” by
Samantha Cameron. This was awarded for all the volunteering work she does as a
member of the Helpline for RP Fighting Blindness, a Telephone Facilitator for the
Royal National Institute for the Blind, working as an Eye Clinic Support Services
Officer at one of Moorfields Eye Hospital Satellite Sites in East London and
becoming the founder of a group called “SocialEyes” to enable blind and partially
sighted people to network and socialise in the local area. 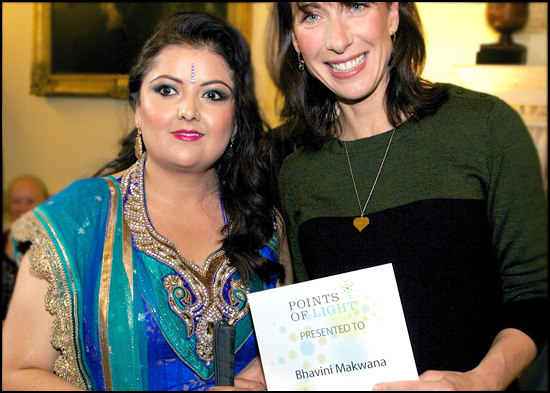 “It has been a very hard struggle growing up as a blind Asian girl, wife, daughter in
law, mother, bringing up children and now working full time. I came across a charity
called RP Fighting Blindness 4 years ago and they helped me cope living with my
sight loss, understand my eye condition as well as supported me to live my life fully
again”, shared Bhavini Makwana

She also received an invitation to attend the Anand Mela Show in Harrow to share a
poem about her eye condition, how it stopped Bhavini from going to University and
the impact it had on her life. Audience members came up to her and said it helped
them understand what it could be like, and were proud to see an Asian woman with a
white cane talking about something that others may be uncomfortable to talk about.
Bhavini had also organised an Information Day in April 2014 in Leicester where
various organisations that offer help and advice attended as guest speakers and
exhibitors; Inspirational speakers who were blind or partially sighted themselves were
invited to share their stories; Audience members were entertained with live dancing,
singing and comedy acts whilst funds were raised, and much more.

Bhavini started raising awareness of the “RP Fighting Blindness” charity and the
work they do, especially amongst the Asian Community to tackle their common
stigmas and taboos, and encouraging others to be comfortable about their sight loss.
She has set up a Facebook page called RP Awareness & Fundraisers by Bhavini
Makwana where Bhavini shares her experiences and offers advice to those with the
disability, as well as their family and friends. She regularly fundraises for the charity
“RP Fighting Blindness” to help them carry out clinical trials and research to find a
cure and treatment for the eye condition, as currently there is no cure.

This invaluable work would enable the charity to continue helping and supporting
thousands of other people affected with Retinitis Pigmentosa. To get further
information, sponsor, donate or purchase tickets for the “RPFB 40th Anniversary
Dinner & Dance” evening contact Bhavini Makwana on 07956 583 203