The RSLB are incredibly excited to announce the launch of our brand new choir and music project, featuring a three day workshop with the Royal Philharmonic Orchestra.

Come along and get involved! If you love music, singing and performing, this is definitely for you. Whether you’re a total beginner or a pro, everybody is welcome.

More of a musical magician than a singer?

This music project goes beyond singing, it has something for everyone. Do you play an instrument, dance, rap, beatbox, write songs, produce your own music? Come along and see what you can bring to the mix.

Are you are interested in sound engineering or documentary filming? Come and get involved, the RLSB Choir needs you too.

What will you be working towards?

Be part of our journey working towards putting on the most epic RLSB Christmas Concert performance. You’ll play a major role in composing, writing and performing a brand new original song, which will be the star attraction of this year’s concert.

In addition to this you’ll get the chance to work with some music legends – the sessions are led by our fantastic choir master and professional singer Victoria (who is vision impaired herself) and Mohammed our sound engineer and producer.

On top of this you’ll get to take part in a three day project run by the Royal Philharmonic Orchestra, including the chance to perform with them.

When and where do you meet?

The RLSB Choir meets twice a month in East London and is open to anyone that is vision impaired between the ages of 11 – 25.

If you want to make new friends that share your passion, or develop your skills by learning from the experts, then get in touch today.

Joining the choir is totally free and there are no auditions to get in. Everybody is welcome whether a beginner or a pro.

On Saturday 23 July we celebrated Illuminate Freedom‘s First Birthday, and what a celebration! 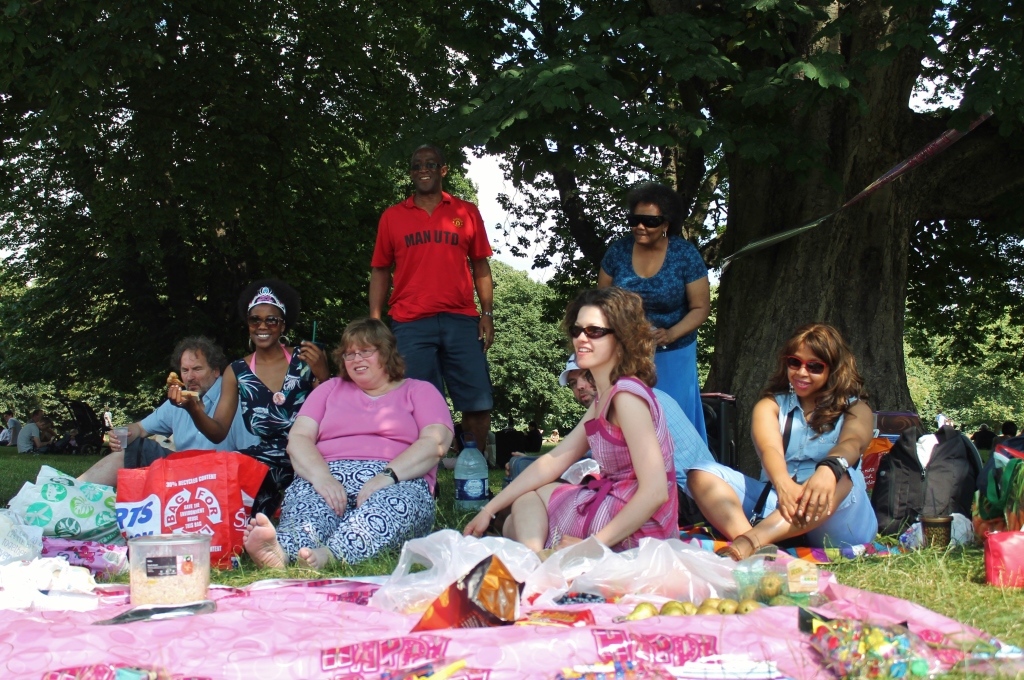 Photo 1: Some of the Birthday Gang relaxing in the sun, bright green grass and trees all around, colourful balloons and a number 1 shaped pink balloon floating in the air

We had an amazing afternoon in sunny Kensington Gardens, with lovely company, delicious food and drink, laughter, music, water pistol fights and obviously lots of dancing! 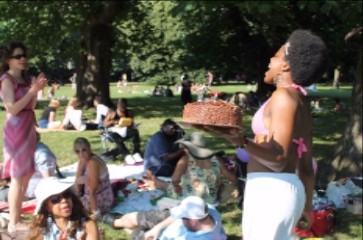 Photo 2: Louise holds a big chocolate cake with a number 1 candle in the middle, and smiles to the group while announcing it is time for the birthday cake

Louise led a great Dance in the Park session, and lots of people (including some very enthusiastic children) joined in!

When we finally managed to pull ourselves away from a great time in the park, stuffed full of birthday cake, some courtesy of our friend Paloma Faith, the party then moved on to The Beachcomber, on Queensway.

We had some amazing cocktails, delicious soul food and again lots of dancing – that’s how we like to party!

Thank you so much to all the lovely people who joined us and contributed to making it such a wonderful birthday – and again a huge thank you to all of you who have been supporting Illuminate Freedom throughout our amazing first year. We can’t wait for the many years to come : )


In Partnership with Golf Trust, we are running a “Let’s Play Golf” session for disabled adults and the Elderly People at Shoreditch Park on Tuesday 16th August from 10:00am – 12:00pm.

A Golf Coach and all equipment are provided.

You just need to come wearing comfortable shoes, a hat if it’s a sunny day and carry some water to drink. This is a great opportunity for us to try something new this summer and get our questions answered by a very good golf coach Benj Lawrence.
http://www.thegolftrust.com/AboutUs.

Details of the event:

If you would like to join us please do let me know by 5:00pm on Monday 15th August.

Also if you know local disabled people who would like to join us please ask them to contact me.
Email: paul.fosu@choiceinhackney.org
Telephone: 020 7613 8136
(Note: I am only available on Mondays and Tuesdays from 10:00AM to 5:00PM)


Choice in Hackney is organising a free gym session for disabled adults and the elderly people at Kings Hall Leisure Centre on Thursday 4th August 2016 from 2:30pm to 5:00pm.

The event will be open to anyone over the age of 18, but no free refreshments will be provided so please bring a bottle of water. Anyone attending will be required to wear sports clothing and trainers (no jeans or formal wear).

Details of the event:

The leisure centre is a 10 minute walk from Hackney Downs Station and Hackney Central Station, and is next to Hackney Baths bus stop. The leisure centre also has free car parking and an accessibility entrance.
Another map can be found here: http://www.better.org.uk/venues/kings-hall-leisure-centre

If you would like to attend please do let me know by 5:00pm on Tuesday 2nd August and do arrive at the reception for 2:00pm on Thursday, 4th August.

I look forward to hearing from you.

Chris Baily and Callum Lock both clinched singles titles before pairing up to win the visually impaired men’s doubles on Saturday at the Tennis Foundation Blind and Visually Impaired Tennis Regional Series event in Cambridge.

A new initiative for 2016, the regional tournaments will count towards qualification for the Blind and Visually Impaired Tennis National Championships which will take place in October at the National Tennis Centre.

Hosted by Vison4Growth, one of the blind and visually impaired tennis groups around the country supported by the Tennis Foundation, the tournament saw Baily, Lock and Paul Ryb all drop just one game apiece to win their B2, B3 and B4 men’s singles events.

Baily followed up a 4-0, 4-0 win over Mick Scadden by defeating second seed James Currie 4-0, 4-1 to win the B2 men’s singles. There was similar success for Ryb, who beat Benjamin Stingmore 4-0, 4-0 before completing his B3 men’s singles victory with a  4-0, 4-1 victory over Alexander Wheen.

Baily and Ryb were on opposite sides of the net in the visually impaired men’s doubles final with their respective partners Lock and Currie. The top two seeded partnerships both won their semifinals without dropping a game, but Baily and Lock proved too strong in the final to take the honours 4-1.

A series of comfortable straight sets wins in the early matches in the women’s visually impaired singles were followed by a closer semi-final for Odette Battarel. Battarel eventually defeated Sarah Fortescue 4-2, 5-4(4), ending Fortescue’s hopes of adding to her B3 women’s singles title at the North East tournament in May.

Meanwhile, Christine Laurence reached the final for the loss of just two games in her quarter-final against Gillian Currie. Laurence followed that with a 4-0, 4-0 semi-final victory over Beverley Chow. She went on to also win the first set of the final without dropping a game and withstood a fightback from Battarel in the second set to win the title 4-0, 5-3.

There was better news for Gillian Currie and Fortescue in the visually impaired women’s doubles as they claimed victory in the final, defeating Battarel and Amanda Green 4-0.

The B1 mixed singles for blind players was arguably the most exciting event of the tournament in terms of close contests. Both matches in the first round and all four quarter-finals were settled in tie-breaks as top seed Roy Turnham, Chris Jefferies, Masuma Ali and second seed Nikhil Nair all edged into the last four.

Turnham was even more dominant in his semi-final, defeating Jefferies 4-0 and he then went on to snatch victory against Nair 5-4(4) in the final, repeating his victories over Nair in the B1 finals in Sutton and Edgbaston earlier this year.

The B1 mixed doubles provided another fascinating set of matches as Nair and Turnham found themselves on opposite sides of the net in another final.

Marion Mansfield and Emma Mead booked their place in the last four with a hard-won 9-7, 7-4 win over Ekinath Khedekar and Monica Smith, but Mansfield and Mead’s progress came to an end against Jefferies and Nair as the top seeds reached the title decider 7-4, 8-6.

Turnham and Fiona Musgrove won the important points to record a 7-5, 7-5 victory over Naqi Rizvi and Ali in the other B1 doubles semi-final. But despite some extremely close straight sets wins in the first three matches, it was only the final that went to a third and deciding set as Jefferies and Nair prevailed 7-4, 4-7, 7-4, giving Nair some compensation for his singles final loss to Turnham.