46 players came from as far north as Glasgow and as far south as the Isle of Wight. The tournament was extremely well organised by the team from NEVITC and I would particularly like to thank Steve Trewick and Wendy Glasper from the organising committee for making the whole weekend run smoothly. All of the competitions were very competitive but played in a positive sportsmanlike spirit.

The tournament adopted two interesting innovations that seemed to work well, firstly we played on an orange size court with only a back line used, secondly the B2 and B3 sight categories were separated, which was generally well received.

On the results front Metro had a great deal of success.

I know we were thrilled with our achievements and rightly so in my opinion.

Although Paul and I lost the mens doubles final there was one lingering memory from that particular match. One of the rallies apparently lasted over 6 minutes and 140 shots were counted I do recall thinking that it was never ending but amazing fun to be part of. What a fabulous weekend and I for one was proud of our achievements!

– by Alan Whetherly
A special mention should be given to Brenda Cassell, who came from three love down in one of the ladies semis to take the North Easts’ top seed Rosie Pybus to an exciting 6 all draw. The match had to be taken to a tie break in which these ladies evenly matched each other point for point. Sadly there had to be a winner and Rosie just edged it in the end. However this was the closest and one of the most entertaining matches of the tournament

NEVITC 2015 Was a fantastic tournament. Great turn out and well run.

For me, like many others, the interesting dynamic was the court size. Opting to only place a back line for the orange court and not narrow the courts, meant we had the length but not the difficulties of being too narrow.

Personally I found this an excellent compromise and more practical than the current rules allow for. The game was so much more enjoyable and the rallies longer. Steve Trewick and Wendy made a very compelling and practical case for interpreting the rules to allow for such court sizes.

Another important consideration was that the B2s and B3 category were split. Again this worked well for those participating from what I could gather.

Start Time:  Festival 10.00am – 11.30am   12 noon Competition
End Time:  TBD
Metro Blind Sport are pleased to announce that their Annual Athletics competition will be held on 20th June 2015, incorporating a Festival of Athletics for vision impaired people, their families and friends. Hosted by key partner London Borough of Tower Hamlets, supported by Canary Wharf Group and Motivate East. 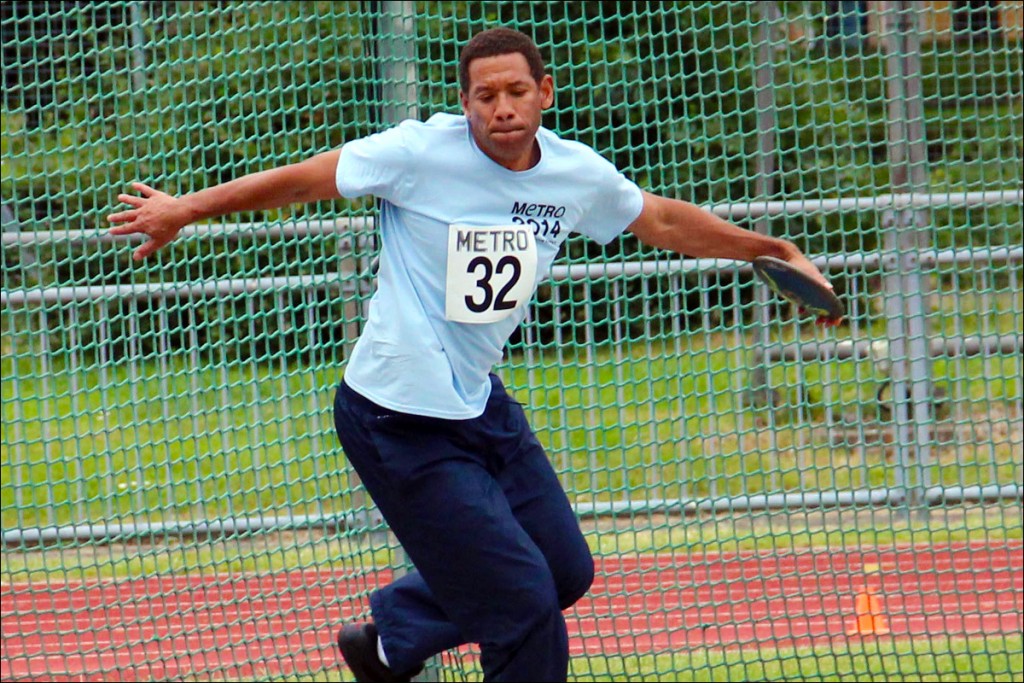 The Festival of Athletics (Endorsed by England Athletics) will offer those new to the sport a chance to try out running, jumping and throwing in a fun and relaxed atmosphere.

Qualified UKA coaches will be on hand to advise and guide you. All ages and abilities are very welcome so come along and try!
Competition will begin after the Festival and we are hopeful to have a UKA talent spotter with us looking out for future Athletics Stars!

Events will be held for Under 18’s, Senior’s and Veterans.
Entry to the Festival and Competition is FREE.
Results will be ratified for Power of 10 rankings for classified and non-classified athletes. 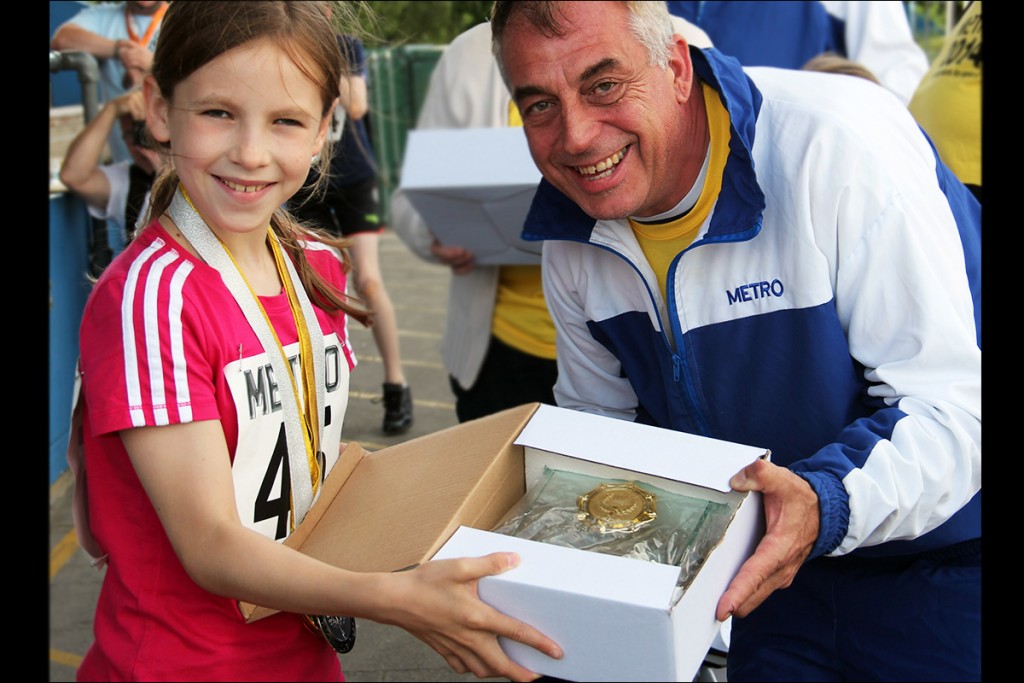 After such a successful event in 2014 with up to 100 vision impaired athletes taking part we hope to make 2015 an even bigger success with a new format, partners and of course your support. We look forward to seeing you there!

Have We Been Here Before?

Although the answer to the question was “no”; there was a strange sense that the answer was “yes”, as the Devils travelled to Frimley cricket club – the home of Surrey VICC for their game this Sunday. There were three good reasons for that: firstly finding the benefit of having named two twelfth men in the squad as this meant there was a full eleven available for play, secondly the train journey starting with Hashmukh thinking he had a prank call on his phone only to discover that in fact there were three very familiar faces on the same train out of Waterloo; and more familiar faces in the Surrey side. Then thirdly arriving at a almost deserted station – however here good captaincy showed in learning from the previous week’s experience; and there were booked cabs waiting for the train and so just a relaxed five minute trip to the ground.

The match started with another familiar repeat performance as the toss was lost; this week however the home side took the usual decision on winning and opted to have a bowl. The low grey skies cleared a little with the best of the day’s sunshine breaking through as the Metro innings started brightly with DS joining Gary in the middle as Brenda was unavailable. They made a pretty good start – perhaps most pleased with the seventh over when they helped themselves to three fours off Amit’s bowling but then in his next over an unusual mix up saw Dave get himself stranded half way down the pitch attempting to get Gary a second and getting run out. The Surrey skipper then bowled Gary to leave the devils on 87 for 2 at the half way stage drinks.

Chris Lewis stepped up to plate after drinks starting with scoring a four off Lois before at one point facing 4.2 overs without giving Andy Law a single ball to face as he raced to 51 from 38 balls in a stand of 71; which included six more fours firmly struck all round the ground. After his retirement Surrey managed to slow the scoring rate down for a while – just 4 runs coming from over two overs, including one from Hassan; the run rate pressure perhaps leading to Metro losing two more wickets quite quickly before a rapid 15 from 8 balls from Aemon, which ended with him hitting wicket as he attempted to hit a third boundary, helped lift the final score to 194. So a defendable total has been set – could it be defended after an enjoyable Waitrose sponsored tea?

The second half of the day started well for Metro as all the bowlers kept the Surrey openers, their captain and Hassan, quiet – the Surrey scoring rate could not match their visitors until the tenth over; although further Metro success via “double O’s” first wicket that bowled the skipper just seemed to galvanise the opposition as Lois joined Hassan and by the half way stage Surrey were 17 ahead of the Metro total. Rob thoroughly enjoyed dismissing the second opener and shortly afterwards Gary took another wicket – but the Devil’s could in the end not defend the total; another familiar face, Harish, appeared at the crease and ran strongly with Lois – including taking a five, so that Lois was able to end the game by scoring the winning runs with two of the allotted overs still to be bowled as she reached 50 with a boundary through mid-wicket. An exciting game – hopefully the T20 between the two sides next week will be just as thrilling.

Meanwhile Metro will hope they do not find themselves in a horrible position in the BBS cup after their quarter final was rained off at the Northamptonshire county ground on Saturday; with dates already set for the semi-finals there is a worry that the game may be replaced by a coin toss. Metro will be keen to get to the semi-final and the chance to play Yorkshire again as it will give them a chance to avenge their league defeat this year. Watch this space for an update on the fixture list.